Overview of UK Housing Market in 2014

In London the market has cooled more quickly than elsewhere across the UK, which has been in contrast to the historical beta correlation of markets in the capital and across the wider nation throughout recent times.

This has of course impacted upon some constituents of our coverage universe much more so than it has on others. For instance, the London centric Berkeley Group and Foxtons Group Plc have both experienced considerable volatility during the year, whereas this has been less of an issue for the likes of Bovis Homes Group which has no London exposure.

Key to this slowdown has been a number of regulatory policy actions taken throughout 2014, which have now had a dampening effect upon the number of monthly mortgage approvals in the UK as well as house prices.

Looking ahead one of the most significant and more recent factors to pose a threat to the housing market is the coming general election, which we revisit later in this report.

The above referenced policy actions came predominantly in the form of the Mortgage Market Review recommendations, which were implemented in April of last year. These saw an increased level of standards and oversight applied to the affordability testing criteria which banks use to determine the suitability of mortgage borrowers.

In addition, the months following the introduction of MMR changes also saw the Bank Of England’s Financial Policy Committee tighten rules surrounding loan to income multiples (LTI’s), which had a further moderating effect upon lending and house prices.

As of January 2014 the monthly pace of mortgage approvals across the country, from all institutions, had returned to roughly the same level they were at when the government first introduced its Help to Buy scheme in 2013. 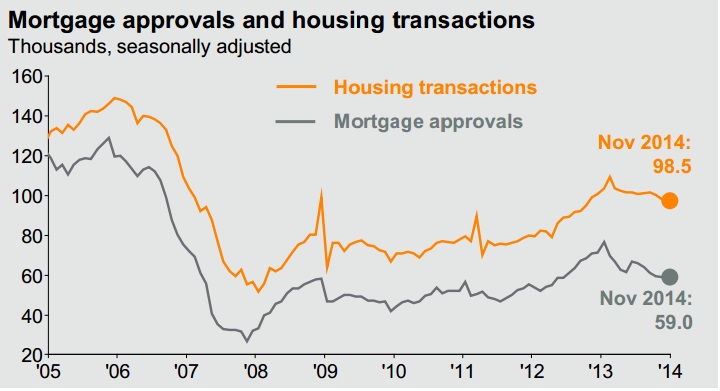 We wrote extensively some time ago about how we expected that a slowdown in mortgage lending would eventually lead to disappointment when it comes to financial results for UK house builders. At present many of the major firms, while having noted a fall in the number of new approvals, appear to have emerged largely unscathed from this downturn so far.

With a number of these companies due to update the market at the end of February, now appears a particularly pertinent time for us to caution that the outlook for sales volumes and mortgage availability going forward is becoming less certain, which could lead to further uncertainty among investors over the outlook for earnings.

In relation to house prices, we note that new housing starts fell sharply in Q4 of 2014 while over the course of the last five years, new build rates have remained consistently below their long term average.

This is a positive for investors as it has the power to support market prices as we head into 2015, particularly if new starts fall further during the coming quarters, which leads us to believe that the moderate decline in prices that began during H2 of last year will probably be short lived.

In terms of mortgages, we note that the Help to Buy scheme has now been extended to run through till 2020, which should also provide a certain degree of support to sales volumes.

However, as we approach the point at which interest rates are likely to begin rising (Q4), it is possible that mortgage rates will also then start to rise. This could have a prohibitive effect upon some buyers and potentially lead to a further contraction in the pool of eligible borrowers. Such an outcome would become particularly likely if house prices were to begin rising once again, as we anticipate, later on in the year.

Nevertheless, we believe that on balance, UK house builders will still be able to grow earnings during the year ahead although admittedly, much of this growth is likely to come from a rebound in house prices during Q2, Q3 & Q4 and not a rapid increase in volumes.

Furthermore, we also believe that valuations across the sector are approaching an inflection point which, after the general election lull, will be likely to drive share prices higher once again.

More importantly for investors, we believe that now such firms appear to have shrugged off the worst of the downturn in mortgage approvals, the bearish tone of many analysts may mean that the market is once again underestimating the scope for growth at UK house builders over the medium to longer term. 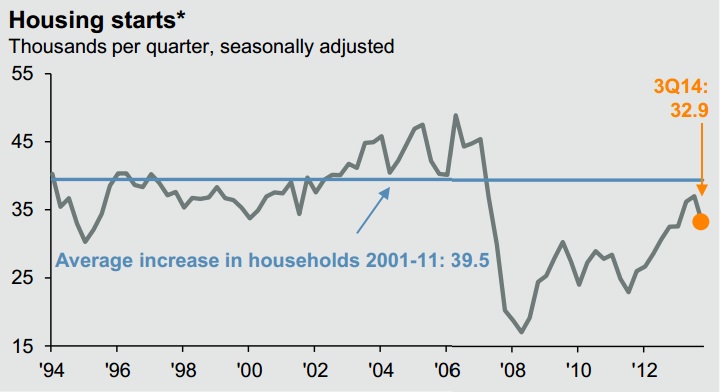 While we expect a positive performance from house prices, earnings and share prices at UK house builders during the year ahead, we caution that the sector faces a number of headwinds over the near term.

Most notably, the general election in May will be likely to prove a particular sticking point as it could create uncertainty over the future of tax policies as well as the Tory party’s Help to Buy initiative.

We expect this to prove an unavoidable pitfall for a sector which has a long history of coming under pressure during elections.

Furthermore, when we look at valuation trends over the length of previous cycles and take into account current fundamentals within the sector, our analysis suggests that both price to earnings and price to TNAV multiples are yet to bottom out.

Here, we note the countercyclical nature of valuations within a sector where investors are often slow to reprice shares in response to growth in earnings.

This means that as both the earnings and economic cycle progresses, price to earnings multiples tend to reduce across the sector during the recovery stages, before rising as the cycle peaks and when conditions later begin to deteriorate.

While any further reduction of these metrics in the current cycle is likely to be the result of earnings growth as opposed to a market catastrophe, if our short term projections for price to earnings (9.0 – 11.0X) and price to TNAV values (1.4 – 1.7X) are to prove correct; then at least some form of share price depreciation will be required over the near term.

However, looking past this point, we see very little downside to the above metrics and share prices within the sector. This is mostly a result of the fact that any further deterioration would place the sector close to break-even, and in some cases a discount, to NAV. Given the positive outlook for earnings and house prices over the near to medium term, we view this as both unwarranted and equally unlikely.

On the contrary, we see valuation metrics bottoming in 2015 before being driven higher into the close of the year, marking an inflection point for the sector. The catalysts for this move are likely to be both the low levels reached in H1, followed by a rebound in house prices during the second half as new supply of housing still remains tight.

To summarise, we expect 2015 to be a positive year for house builders now that many of them appear to weathered the worst of the downturn in mortgage approvals.

While we see limited scope for a marked recovery in mortgages and sales volumes, we do believe that there are reasonable grounds to expect a recovery in selling prices later in the year and this should help to support earnings.

However, near term headwinds and our own projections for valuations within what is a notoriously cyclical sector suggest that share prices will probably fall throughout the first half of the year.

While investors are not likely to welcome any form of share price depreciation, there is consolation to be found in our expectation that Q2/Q3 2015 will probably mark an inflection point for valuations within the sector. In short, we expect that from this point, valuations will bottom out and should soon begin to rise from there.

This is because prices will be close to par with NAV values in many cases, while the earnings outlook remains positive, which would make further selling by the market both irrational and unlikely.

It is at this point that we will look to begin raising our price targets for the house builders within our coverage universe (Bovis Homes & Barratt Developments).