A budding economic recovery, stronger growth and government initiatives have each helped to make UK property a central theme for investors over the last 24 months. However, certain changes on the horizon are likely to affect the road ahead for those investing in this area.

This report is broken down over two halves and outlines the meaning of these changes to investors, before providing a brief commentary and overview relating to a selection of featured companies in the second half of the report.

While home sale prices have remained in a slow upward trend ever since 2008, government initiatives throughout 2013 have helped to accelerate the pre-existing recovery, and this has now led to nationwide price increases as well as a revival of optimism among everyday households.

Along with progressively higher stock markets, the activity in the housing sector over the period has enabled a classic wealth effect to become embedded that has since initiated a chain reaction throughout the remainder of the economy, beginning with modest initial improvements in forward-looking PMI surveys.

Since this time, business confidence has returned on a broader basis and now both output numbers as well as overall economic growth are on course to reach levels not seen since before the global financial crisis.

Two quarters into 2014, the UK now appears poised to secure the title of “fastest growing developed economy” for the year, while general consensus estimates see overall GDP for the period coming in above 3%, its highest level since 2007.

Some of the investors that will have benefited the most from this economic renaissance are those who bit the bullet and bought into the house builders close to the bottom of the downturn.

Bovis Homes, Barratt Developments and Berkeley Group are just some of the companies whose share prices have rallied strongly throughout the intervening period, after spending the recessionary years building upon their land banks and reducing their debt profiles.

In short, government initiatives and the sale/purchase property market have both, individually and together, been integral to the economic recovery that is now underway in the UK. Despite this, we now believe that the fortunes of the two are positioning to diverge.

One of the key catalysts behind this change has been the very economic recovery that the industry first helped to nurture. As full employment, business conditions and business output have all risen, so too have interest rate expectations. Present forecasts now see the first rate rise taking place sometime in Q1 2015, two years forward from the Bank of England’s initial forecast date.

This, when combined with the evolving regulatory landscape, now threatens to undermine the likely future performance of what has been one of the most popular sectors for investors over recent times.

The first graphic below illustrates the performance of homebuilder shares relative to the FTSE 100 between July 2012 and the present day. The final graphic below displays the trend in house prices over the previous ten years, as represented by the Office for National Statistics and the UK’s two largest mortgage lenders. 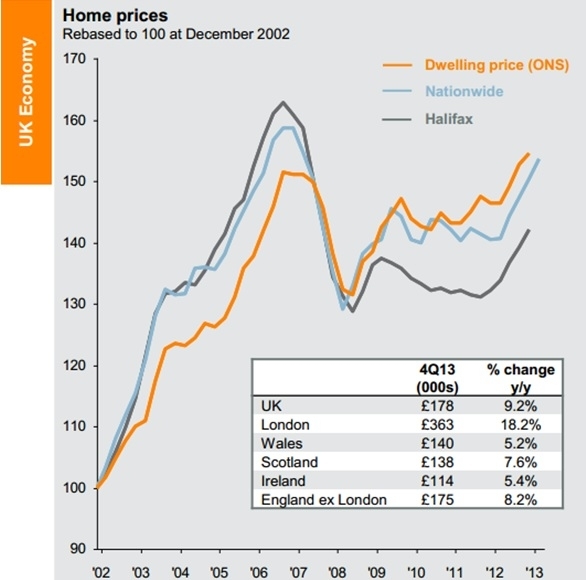 Excessive borrowing and lending by both consumers as well as financial institutions has been recognised as a key contributor to the financial crisis. Among other things, interest rate movements have been cited as a further catalyst in the acceleration of the crisis.

When the bank rate began to climb from 3.5% in 2003 to 5.75% by December 2007, an increasing number of borrowers slowly began to find that they were unable to sustain their financial positions.

This followed a sustained period of credit growth within the economy, most notably in mortgages. While there were other factors that contributed to what followed, the overall outcome was the same regardless. Growing numbers of borrowers began to default upon their mortgages, both in the UK as well as overseas, which led the financial system down a slow but steady path toward turmoil.

In order to prevent a re-occurrence of this, policy makers have made significant changes to the way in which financial institutions are supervised, while also developing a range of tools which are designed to enable regulators to better respond to a build up of risks within the financial system as well as behaviour or trends in borrowing and lending.

Now that house prices have emerged from the other side of a solid year of growth, and given that the government’s Help to Buy scheme has been recognised as a driving force, the attention of both policy makers and the everyday observer has turned resolutely toward the question of whether or not another property bubble is in the process of inflating.

“The growing momentum in the housing market is now, in my view, the brightest light on that (FPC) dashboard” – Sir Jon Cunliffe, Deputy Governor of the Bank of England and Financial Stability Committee

This increases the relevance, and magnifies the potential impact, of regulatory changes to investors in the UK property market. Some of these were the product of the Mortgage Market Review, which has significantly altered the way in which mortgages are sold so that they are now recognised as a regulated product similar to shares and bonds.

It is the outcome of the MMR that we will focus on for the most part of this report as it is this that is likely to have the most profound impact upon the outlook for UK home builders and property-focused companies over the near to medium term.

About the Mortgage Market Review (MMR)

The Mortgage Market Review is a comprehensive assessment of UK mortgage borrowing and lending. Initiated by the FSA (FCA), its primary focus was upon the reform of what was deemed a broken system as well as the prevention of high risk lending and borrowing which has been recognised as having led to a build-up of risk within the financial system ahead of the crisis.

The desired outcome from the review, and its changes, is a more sustainable system that works better for consumers. Final recommendations and rules were agreed upon in October 2012 and came into effect on 26 April 2014. Those rules and recommendations are detailed below in bullet point format.

1. MMR places a clear distinction between mortgages which are sold and mortgages which are advised. Under the changes, all salespeople and firms offering advised mortgages will be accountable to the FCA and will have to undergo the same level of professional training as those who retail other financial products such as shares.

2. Firms now have to place a greater emphasis on finding the right mortgage solution for the customer, taking into account the individual needs and specific circumstances of the consumer. Any recommendations that arise must be made on a best interest basis, meaning that the recommendation must be one that best addresses the needs and situation of the borrower. This will be likely to have the effect of extending the mortgage application and approval process.

3. Re-mortgage focused businesses will also be enveloped by the new regulatory framework.

4. Heightened affordability criteria and testing is central to the new framework. Lenders will have to show regard for the future interest rate outlook by judging the affordability of a mortgage over a five-year period following the loan. This will involve an interest rate forecast on a worst-case scenario basis and making a final judgement on affordability based upon this. Under the rules, lenders are free to base their decisions upon their own interest rate outlook; however, they must be able to justify how they have come to hold this outlook when asked.

5. Lenders also now need to undertake a more extensive assessment of a borrower’s spending behaviour, which may often require a higher level of documentation to be reviewed.

6. The criteria for interest-only mortgages has tightened and this area is now expected to account for a much lower proportion of overall mortgage lending than has previously been the case.

While the policies and their desired effects are both warranted as well as likely to be positive for financial stability over the longer term, one or two features are a cause for concern from an investment perspective.

The most notable is the introduction of the new interest rate stress test requirement as part of affordability assessments that mortgage lenders must undertake. This dictates that lenders must consider the five-year interest rate outlook when making lending decisions. In doing this, lenders must assume a minimum increase of 1% in bank rates irrespective of the directional trend of rates at the time.

While during a period of deteriorating economic conditions and falling rates this is unlikely to materially alter, from the present, the ability of the average borrower to secure a mortgage, in a rising rate environment the new requirements could prove prohibitive to many borrowers. This could potentially magnify the impact of rising rates upon mortgage lending, leading to lower transaction volumes relative to historic averages over the longer term.

Implications and the Road Ahead for Investors

Our view of the changes is that, ultimately, at some stage they are likely to lead to a slowdown in sales volumes across the UK (excluding London) for homebuilders and estate agents. While we feel that the current debate and political pressure upon the government to scale back its Help to Buy initiative is unlikely to prove successful, regardless of the outcome, its continued presence is not likely to have much of a mitigating effect against the new rules.

While Help to Buy addresses the persistent lack of savings among UK consumers, it does not improve the affordability of mortgages for borrowers over the longer term. The limiting factors relating to this are excessive house prices and low incomes across the population, both of which require deep structural change for them to be suitably addressed.

As a result, in the interim, we expect the number of those who are excluded from access to mortgage finance to increase and that transaction volumes will fall before prices decline or incomes rise. Although this may take some time to have an impact, one way or another, upon either the top or bottom lines of homebuilders, we believe it is only a matter of time.

At the very least, we expect that the growth in transaction volumes of the last 18 months will stall for a sustained period and that, given the “pricing in” of what are now exuberant and ambitious future sales forecasts over the last year, sentiment toward the listed UK house builders is likely to sour dramatically over the coming 6-12 month period.

As a result, we now view the share prices of many UK homebuilders as being dislocated from reality and accordingly, we revise downward our price targets for them in the second part of this report.