In the UK, equity markets held close to record highs last week as a rebound in oil prices and the possibility of a Greek debt deal drove a recovery in investor sentiment.

We wrote last week that with current fundamentals taken into account, in addition to the above factors, there is a distinct possibility that the FTSE 100 could make a break into uncharted territory during the weeks ahead.

This week we note the index’s close at 6,915.00, just a short distance from its all time high, and reassert our earlier view that new peaks remain a possibility for the weeks in front. However, this will be contingent upon a flurry of financial results expected through February and March, from the house-building sector, the financial sector and the insurance sector.

Should there be a broad sense of disappointment with the latest round of earnings numbers then it is possible that the FTSE 100’s ascension into new territory will be delayed once again.

On the economic data front UK retail sales missed estimates considerably last week with a -0.3% contraction, in line with the performance of US consumption indicators, while store selling prices for a wide basket of goods also recorded their largest decline since reliable records began in 1997.

Unemployment rate fell to 5.7% while average earnings increased by 2.1% during the three months running to January, the largest reported increase since August 2013.

In addition to this, UK inflation figures were also released last week, which we wrote about in our report titled; UK economic data rebounds; both Core inflation and wages push higher.

The key point that we made in the above report was that while headline CPI is still falling and, could fall below zero during the months ahead, Core CPI inflation is actually rising. This is the measure which strips out the impact of food, energy, alcohol and tobacco prices.

We take this to mean that while downside price pressure exist when it comes to markets for energy and food, price pressures across a wider basket of goods are not as weak as many investors currently believe, which indicates that in relation to the UK at least; the deflation scare could be greatly over-hyped.

We believe that this is also true of the US where Core inflation is currently at 1.6%, due in part to strength in housing and healthcare costs.

The net effect of the current UK & US inflation dynamic is a situation where investors could be broadly underestimating both the need for, and the resolve of policy makers in both countries to raise interest rates.

This creates the risk that investors could be blind sided later in the year by either the Federal Reserve or the Bank of England, while it also adds credibility to our expectation that Janet Yellen’s tone at this weeks testimony to the Senate Banking Committee and House Financial Services Committee could be less dovish than last week’s FOMC minutes have led investors to expect.

Further support for this expectation can be found by examining the implications of a strong January payrolls report, which was accompanied by a noteworthy increase in the household savings rate for the coming months.

As a result of this we conclude that Janet Yellen will likely reaffirm her view that disinflationary pressures are “transitory” this week, while citing a tighter labour market and the stronger financial position average households as reasons for why an interest rate hike remains on the cards.

Key events for the week ahead

As referenced above, the key events for investors during the week ahead will be speeches from policy makers in the US and Europe, in addition to second estimate GDP figures for both the UK and the US. German CPI numbers are also due out at the back end of the week.

To summarise our expectations, we anticipate that Janet Yellen will sound a more hawkish tone than is currently priced into markets, while we also believe that Mario Draghi will do his best to add further weight to the ankles of the euro by emphasising the significance of the QE program which begins in March.

In terms of economic data, we believe that the risks of a downward revision to UK GDP are noteworthy, given the broad based slippage of economic barometers in Q4. We are neutral on the outlook for the second estimate US GDP number. 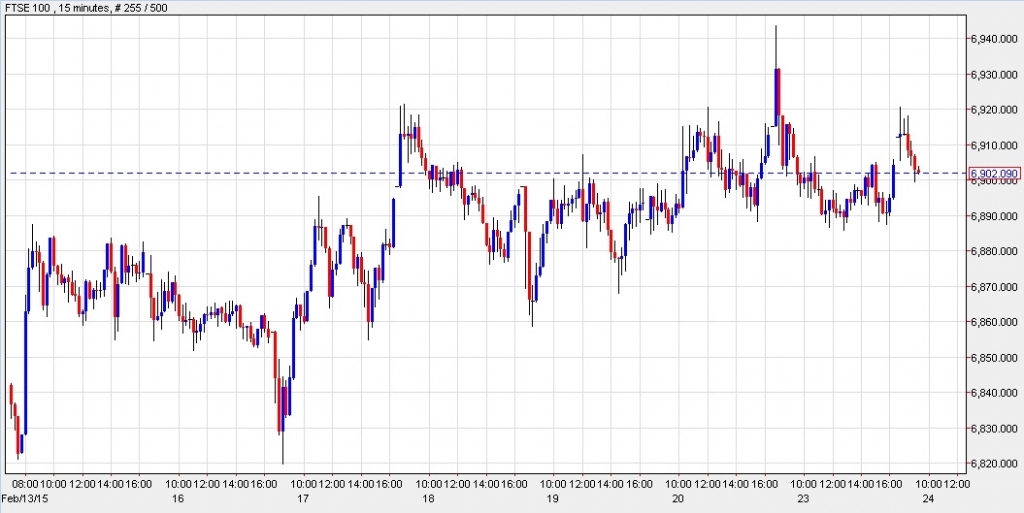