The horizon brightens over the periphery once again

Despite the impact of the global sell off on continental markets, the horizon over the periphery of Europe brightened once again this week as early estimates of Spanish GDP saw the country emerge from its strongest quarter of growth since Q1 2011.

This marks a return to pre sovereign debt crisis levels of expansion for the country. The official GDP figure came in at 0.3% for the quarter (quarter on quarter) which puts overall 2013 growth at 1.2%.

Aside from a similar modest print in 2011, Spain has not seen this pace of expansion since the onset of the global financial crisis. This return to meaningful growth for Spain coincides with falling budget deficits elsewhere on the periphery, further underlining the recovery taking place in Europe.

The below graphic shows unemployment stubbornly high while the cost of labour in many European economies appears to now be reversing from its previous peaks. 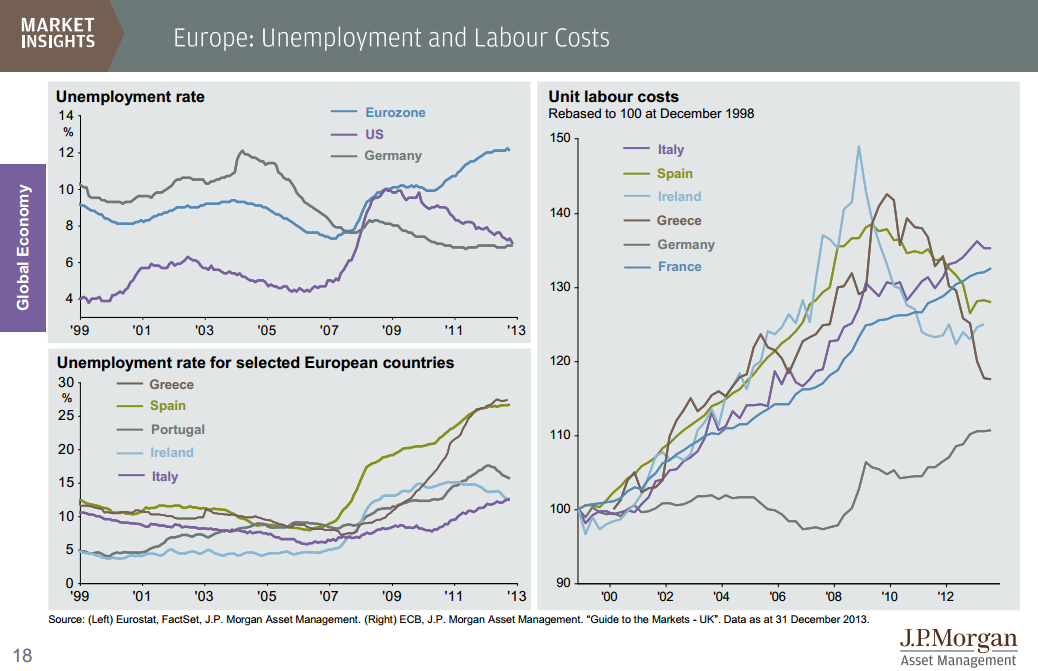 With labour costs now falling from their record peaks, compression in the unemployment rate is likely to follow. Both of these dynamics are positive, not just for the EU economy, but for euro area stocks as well. This is as any up tick in employment would be likely to translate into further improved economic growth and a modest revival of a more positive consumer sentiment.

The single most significant risk facing the continent in the near term is the current turmoil in emerging markets. Should the world’s junior economies spasm into a sustained period of contraction then the consequences for European nations could be severe. This is due to their close trade connections with emerging economies.

Despite this, we feel that the risks are more toward the upside when it comes to Europe at present. For this reason we continue to believe that European stocks could prove an area of worthwhile opportunity over the coming years for investors with the requisite risk profiles and time frames.