Nominal wages fall in the UK, despite strengthening growth momentum

Nominal wages fall in the UK, despite strengthening growth momentum

This was while policy makers at the Bank of England announced during the August quarterly inflation report that the outlook for CPI remains balanced, with no notable divergence away from the 2% target expected during the final stages of the year.

The upbeat but still cautious tone came against a backdrop of unemployment and average earnings numbers which were less than inspiring. Although the unemployment rate fell to 6.4%during July, its lowest level since 2009, average earnings figures indicated a grim outlook for consumer incomes over the medium term.

This was as nominal wages fell in the UK during the second quarter of this year, by 0.2%, representing the first fall of its kind for over a decade. While real incomes (wages less inflation) have fallen persistently since the onset of the crisis, so that they are now 8% lower than in 2007, nominal wages have continued to grow throughout much of this period; albeit meekly. 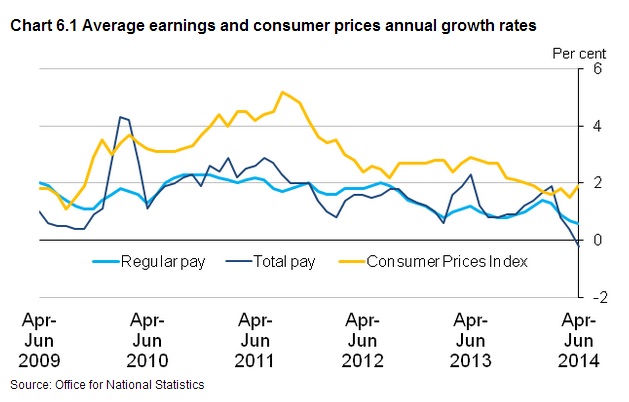 The figures for Q2 average earnings emerge at a time when the growth of real wages is critical to the longevity of the recovery. We wrote in a recent note (UK Economic Update – The UK Economy in a Rising Rate Environment) that wage growth would be the single greatest determinant of whether or not the UK economy will be able to withstand an interest rate rise at any time during 2015.

For an economy which has been resurrected by a surge in housing activity, consumer confidence and consumer spending; the likelihood of the current recovery being able to withstand further reductions in either real or nominal incomes over the months and quarters ahead is minimal. Consequently, the prospect of a sustained period of further reductions in real pay does imply elevated risks to the UK economic growth outlook going forward.

For further information relating to the UK economic outlook over the months ahead, click here for our most recent report:

In relation to markets, the FTSE 100 closed higher on the week despite a notable increase in tensions over Ukraine. The focal point of the period has been the announcement from Moscow that it has despatched a convoy of 260 trucks carrying humanitarian aid to eastern Ukraine.

Many western governments have worried that the humanitarian aid mission could be used as a pretext for an invasion. This is while western media outlets continued to report high levels of troop mobilisation near to the border with Ukraine throughout the week.

In addition to uncertainty surrounding the aid convoy, reports from Kiev also hit the newswires late on Friday which claimed that Ukrainian forces had been forced to fire upon a Russian military convoy as it allegedly crossed the border late on Thursday night.

While these reports have not been independently verified, it is clear that as the noose tightens around the necks of Moscow backed separatists, now confined to their last stronghold in eastern Ukraine, expectations of intervention from Russia have increased.

The early stage of the week ahead sees inflation figures emerge from both the UK and the US, while Fed Chair Janet Yellen and ECB President Mario Draghi are both scheduled to address an audience at the Jackson’s Hole Symposium in Wyoming, North America, during the latter half of the week.

While little deviation is expected from the usual mantras during speeches from North American and European central bankers, Tuesday’s inflation numbers imply potential positives and negatives for equity markets.

This is as weaker inflation in the US could see investors betting on lower rates for longer – which would be positive for markets; while the reverse of this outcome applies if North American CPI emergers stronger than expected. Should this happen then investors could revise forward their expectations for the first hike to the Federal Funds rate, which would more than likely encourage a negative performance from equity markets.