Emerging market contagion saw the NIKKEI fall by 5% over the course of the week in a wave of profit taking as nerves broke and investors fled the Japanese stock market in droves.

This was despite a raft of positive economic data indicating that Abenomics continued drive the Japanese economy forward right into the final hours of 2013. This was as Monday saw the December Corporate Services Price Index achieve its eighth consecutive month of expansion in what was the fastest monthly increase in producer prices for five and a half years.

In addition to December’s acceleration in the Corporate Services Price Index, Retail Sales, despite missing official forecasts, also saw a robust increase in December for the fourth month in a row.  The continued improvement in Japanese growth prospects continues to bode well for the current government’s plan to end deflation and stimulate sustainable long term growth. The below graphic illustrates the recent trend in Japanese GDP and consumer prices. 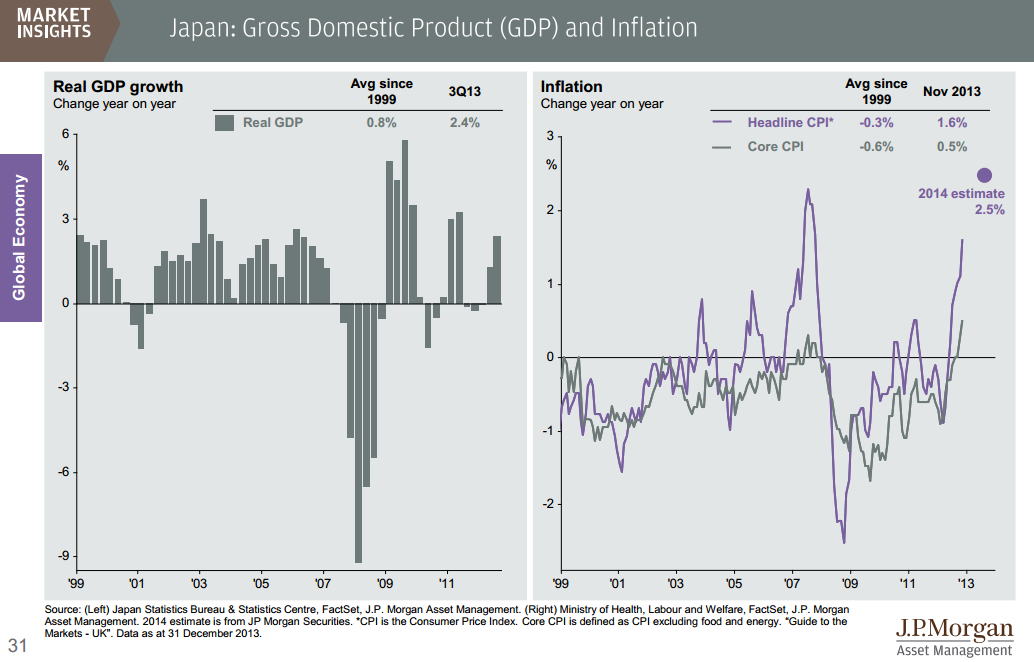 The next major event for the Japanese economy, outside of monthly data releases, is the scheduled sales tax increase in April. This sees the Japanese equivalent to VAT increase from 5% to 8%, a move which has caused much concern among investors.

The concern is that an increase in taxes, without a simultaneous increase in national wages is likely to translate into a real terms reduction in disposable income. Many investors and commentators have worried that this will dent demand within the economy and as a result, hamper attempts to ignite inflation.

In attempts to soothe concerns, the government has repeatedly asserted its willingness to increase its the pace of its quantitative easing stimulus program in order to avoid any tightening of liquidity within the economy.

Although some observers have expressed doubts over the effectiveness of this measure and the will power of Japanese policy makers to go all of the way to the end with the Three Arrows program. Our view remains that the Abe government has demonstrated its commitment to reforming Japan.

In addition to this, recent diplomatic disputes with China and a number of controversial moves by Shinzo Abe on home soil are likely to see political pressure increase upon the Prime Minister to deliver on the promise of economic reform. Should his commitment appear to falter then the Japanese leader will be likely to face a rebellion within his own political party, which would pose a threat to his ability to remain in office.

For this reason we expect Japanese policy makers to remain committed to economic reforms. With the right policy tools at their disposal, full control of government and a more upbeat outlook for developed economies throughout 2014; we see another positive year ahead for the Japanese economy and investors in Japanese stocks.