Equity markets dropped further this week in a global rout that has so far wiped $1.7 trillion of value off of global indices. The sell off has left the FTSE 100 down by 5% while both the Dow Jones and the S&P 500 have dropped by 5.5% and 3.8% respectively over seven trading days.

The sell off that began in the currency markets was ignited by concerns over emerging market growth and financial stability late last week, following poorer than expected manufacturing data from China.

Another contributing factor was the near collapse of China Credit Trust Co which has, once again, raised concerns over potential dangers lurking underneath the surface in the multi trillion dollar Chinese financial system.

Such concerns pervade at present due to the increased reliance of junior markets upon access to cheap credit. Since the onset of the financial crisis, funds have flowed into EM nations in search of both yield and growth as interests rates fell toward record lows in the west.

This has significantly reduced borrowing costs while dramatically increasing sovereign debt liabilities for some of the world’s most embryonic economies. The below graphic illustrates (on the right hand side) how outstanding sovereign debt for EM nations has doubled in the years since 2008. 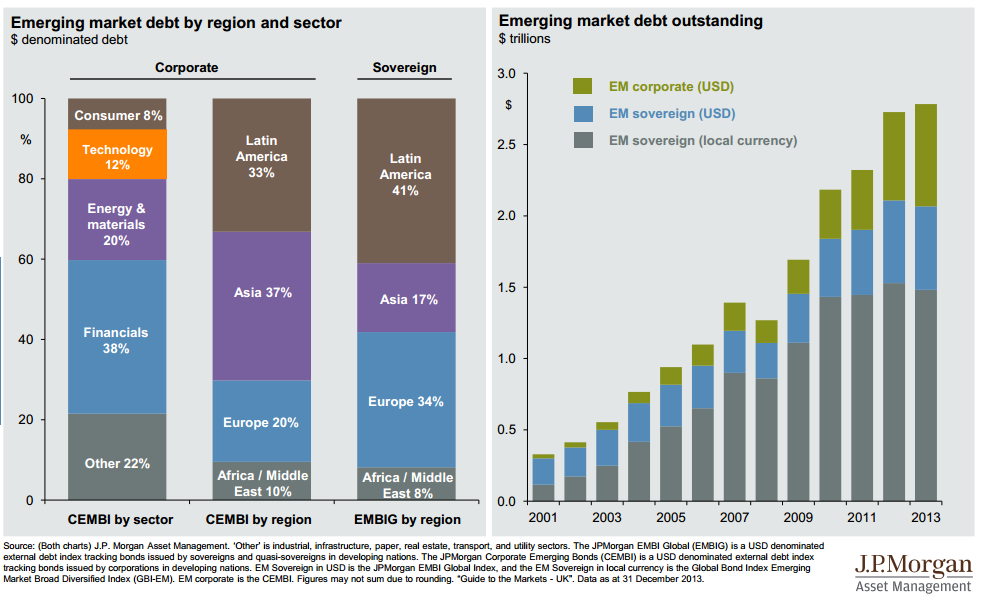 UK Economy rounds off its best year since 2007, US growth remains strong

Q4 GDP figures released on Tuesday this week showed the UK economy growing at its fastest pace since the onset of the financial crisis in 2007. The official figure came in at 0.7% on the quarter, bringing overall growth for the year to 2.4%.

Despite being a positive step for the economy as a whole, the FTSE was undeterred in its descent from previous peaks as investors continued to fret over emerging market stability. Weaker markets were further compounded by investors adopting a different view of the Federal Reserves decision to taper this time around.

This was as markets continued to drop following the FOMC’s announcement that it would further reduce the rate of asset purchases by an additional $10 billion in February, bringing the total remaining value of monthly purchases down to $65 billion.

In addition to positive data emerging from the UK throughout the week, more GDP figures released on Thursday showed the US economy also expanded at a rapid pace throughout the final quarter with the official number coming in at 0.8%. This brings the annualised growth figure for the US to 3.2 %.

Despite the recent downside in equity markets, developed economies are forecast to see vigorous growth throughout 2014 and this week’s figures, in our view, confirm that the UK and US economies are well positioned to achieve this.