The FTSE 100 closed lower on Friday as investors switched into risk off mode, even in the face of further record highs in US markets. This was as continued improvement in growth momentum stoked the fires of the interest rate discussion while looming elections in both Europe and Ukraine cast an air of uncertainty over the potential lay of the political landscape come Tuesday morning.

The headline act for the week was undoubtedly retail sales data which showed UK consumer spending rising at its fastest annual pace since 2001, with increasing volumes actually beginning to support spending growth in a more meaningful manner as opposed to the inflationary drivers of recent years. 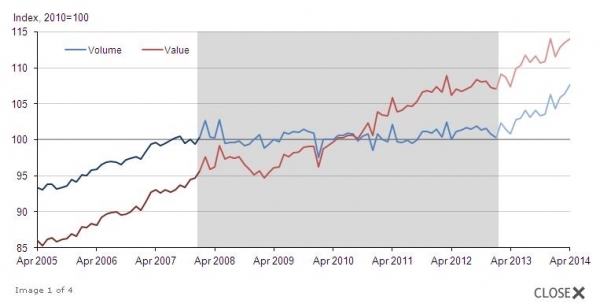 Another positive contributor to the economic picture this week was the second estimate of UK Q1 GDP figures which confirmed that accelerating growth, indicated by the preliminary figure, was as expected at 0.8% for the quarter. This sees GDP on track to top the 3% level this year, marking the UK as one of the fastest growing developed economies globally.

Sector contributions to GDP in Q1 2014 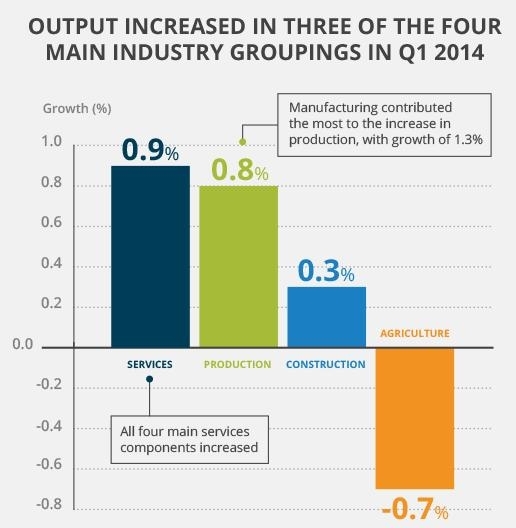 Business investment was also revealed to have increased significantly over the quarter as decision makers scrambled to increase capacity in the face of a year of strong growth in both output and expansion. The official figures saw a headline increase of 2.7% Q on Q VS expectations for a more moderate number of 2.3%. This marked the first instance of five consecutive quarters of back to back increases in investment from British boardrooms since 1998.

On a slightly less positive note, Office for Budget Responsibility data showed government borrowing tripled during April when compared with the same period a year ago. Government debt to GDP was also revised upward for the 2013/14 fiscal year, increasing from the previously anticipated 74.5% of GDP to 76% of GDP.

In short, while fiscal imbalances still present a challenge as government borrowing remains at elevated levels; growth remains on track for the year. With all other things held constant we could see the economy expand during 2014 at a pace not seen since 2007. This is while UK output is widely expected to close the gap in size between between pre global financial crisis years and the present day by finally recovering all lost product.

Next week sees the economic data calendar fall quiet for the UK, with no releases of any significance scheduled. Despite this, US consumer confidence, GDP numbers and unemployment claims could move equity markets in London if outcomes deviate too far from the path of expectation.