Electricite de France (EDF) is a Paris based electrical energy company, in which the French Government holds an 85% stake.

The group’s core operations are centered around the production, marketing and distribution of electricity. EDF generates electricity using a range of technologies, but most notably; through nuclear and hydroelectric means.

While the group supplies both business and private customers across the globe, its core operations are in France, the United Kingdom and Italy. The group is one of the “big six” energy suppliers in the UK and has recently won the tender offer to construct the UK’s first new nuclear reactors for over 20 years  Electricite de France is listed in Paris and the shares are denominated in Euros.

EDF shares remain under pressure throughout close of the year and into Q1; tariffs under the spotlight

EDF have remained under pressure throughout much of the time since we initiated coverage back in November, as concerns over future electricity prices in France and a number of the group’s projects appear to have discouraged investors from renewing their interest in the share.

Where the future of electricity tariffs have been the predominant issue for investors in EDF throughout much of 2014, the weakness seen in the shares during recent months now appears to have been the result of concerns over underlying electricity prices.

This is as December 2014 saw both forward and spot prices for electricity in France fell below the ARENH tariff rate, which is the official price point set by energy regulators for EDF’s spare nuclear capacity.

Despite the recent weakness of market prices there does appear to be some form of hope on the horizon for EDF, as many industry analysts now expect a 5% increase in the ARENH tariff rate in July this year, after some furious lobbying from EDF throughout 2014 and early 2015.

The rationale for such an increase is that in order for the group to fund the level of investment required to keep its nuclear fleet operational into the next decade, it will need to be able to charge higher rates at both the wholesale as well as retail levels.

Therefore, in terms of prices, the main variable which investors need be concerned with for the time being is the underlying market price for electricity.

However, with uncertainty building over the future of floundering French nuclear operator Areva, the current low level of electricity prices is not the only challenge facing EDF at present. 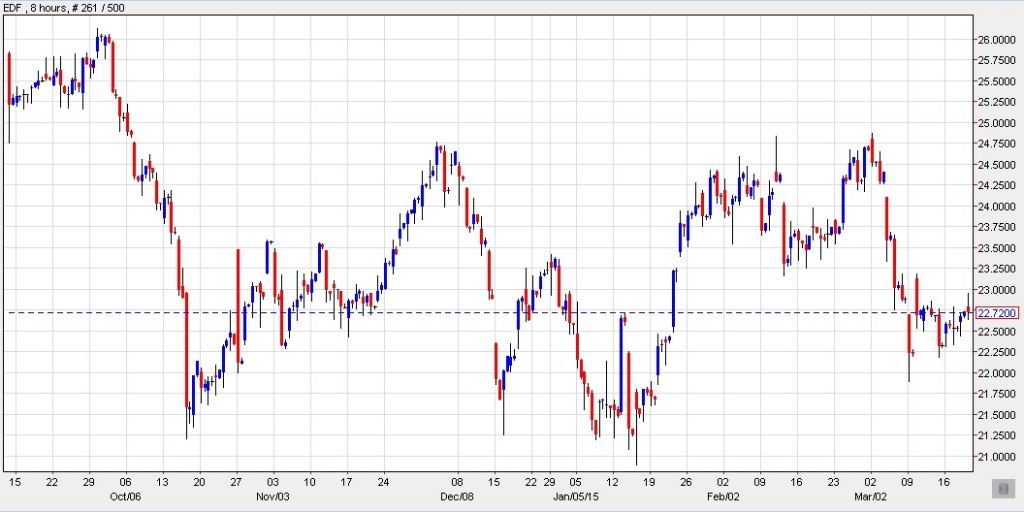 A bigger problem than tariffs and electricity prices lurking beneath the surface; EDF may be required to bail out France’s No.2 nuclear firm Areva

The most notable of developments to have occurred since we initiated coverage of EDF are is that which concerns France’s number 2 nuclear firm, Areva.

This is as the struggling firm booked a 4.8 billion euro loss when reporting results in February, an amount which is almost 40% greater than its 3.6 billion euro market cap. The cause of the loss is widely believed to be cost overruns at two of the group’s construction sites, one in Finland and the other in France.

The implications of this are that the French government, as the majority shareholder, may now be required to organise some form of bailout which will inevitably bring it into conflict with the European Union’s rules surrounding state aid as well as with private shareholders due to the strained financial position of Areva.

The one viable option for a government led solution would be for ministers to lean on the EDF board with a view to pushing it toward a takeover of Areva, or the purchase of some of its assets.

While such a move may solve Areva’s problems it would probably be value destructive for EDF shareholders in the short term, as it may undo the group’s work to date on restructuring its debt profile and it could also impair the group’s earnings profile, i.e – be dilutive for EPS and returns on capital depending upon how any potential deal is structured.

So far, the prospect of EDF having to come to the rescue of Areva has put the frighteners on investors and thus, has added to the downward pressure upon the shares during Q1.

At present it is not possible to suggest what the end outcome will be in relation to this however, we expect that further information from both boards and the French government will follow in the coming weeks.

Preparatory groundwork begins at Hinkley Point in the UK

While some thought that it may never happen, the beginning of 2015 marked what appears to be the official start of works to build two new nuclear reactors at the Hinkley Point plant in the UK. This was as heavy machinery rolled onto plant in January and commenced excavations to make the site ready for construction to begin later in the year.

Although some level of uncertainty still exists surrounding the some of the funding for the project, we do not see any major barriers to construction at the current time and we take the commencement of groundworks as a sign that EDF remains confident that it can successfully conclude negotiations with two state owned Chinese companies which are expected provide some of the funding and construction equipment, as well as to take a share of the finished plant.

The final investment decision and agreement, between EDF, the UK government and several other firms is expected to be announced over the coming months; probably after the general election in May. This will be the official green light to commence major construction works.

In terms of financial numbers, group income was moderately higher at EDF for the 2014 year while top line costs also fell slightly. However, the resulting 7% increase in gross profit was negated by higher depreciation and impairment charges for the period, which ultimately left operating profits some 4% lower.

The improvement in the top line was mostly the result of a stronger performance from the French retail and wholesale units, as all other geographic territories experienced varying degrees of decline in terms of EBITDA during 2014.

Despite this, and looking ahead; management remain optimistic over the outlook for nuclear power generation in both France and the UK.

This is because the two UK reactors that were disabled this year due to faulty parts were brought back online at the close of last year, while output in France is also expected to remain close to the record levels seen in 2014.

In relation to the balance sheet, Net debt was up €0.8 billion, or about 3%, while debt / EBITDA came in at the lower end of management’s target range (2x). This is while the average maturity within the group’s portfolio extended to 13.2 years while the cost of debt fell slightly, leaving the average coupon at 3.3%.

Despite the increase in leverage during the period we continue to view EDF’s balance sheet as having improved during 2014. This is given the reduction in net debt/EBITDA and the extension in the maturity profile of the group’s debt.

In terms of dividends, management kept the payout steady at 1.25 euros this year. This was in line with expectations although we note that cover on the dividend slipped slightly to just over 1.4X, which means that if the group does not see a pickup in earnings this year then the outlook for the payout could become less certain as the reporting period for 2015 approaches.

From a valuation perspective, EDF is currently trading on a multiple of 12.8X 2014 earnings, which is marginally below the 13.9X multiple of the wider sector. Given our expectation for a minor rebound in earnings this year we see the above valuation as undemanding.

On balance, little has transpired over the last six months to change our base case view for EDF.

Although the group’s bottom line financial performance slipped slightly during the 2014 year, the prospect of a stronger performance from the UK division in 2015 along with the potential for a tariff hike this year should provide some form of a boost to the bottom line come reporting season.

Further on the downside dividend cover also slipped at EDF in 2014, which means that if the shares are to avoid speculation of a dividend cut in 2015/16, earnings will need to pick up over the coming months.

While the likelihood of a rebound in earnings will probably be as equally dependent upon impairment charges as it will actual organic growth, we believe the risk for earnings is to the upside during the year ahead.

In this regard, we note the likelihood of a stronger performance from the UK division now that the Heysham and Hartlepool reactors are both back online. We also see the improved prospects for a tariff increase in July this year as boding well for earnings over the medium term.

In terms of risks to our outlook, while any potential merger with the struggling Areva could be disruptive to performance at EDF, we believe that asset sales and/or a rights issue will be preferable to all parties in the equation and therefore, the chances of an outright tie up appear to be quite slim.

As a result, and on the whole, we conclude today by maintaining our positive medium to longer term view of EDF SA. Although, due to current uncertainty over the outcome of the situation with Areva, we believe that the shares are likely to remain under pressure for the time being.

Consequently, we leave our downside price target of 20.0 euros per share in place and unchanged today. The next scheduled event of note for the group will be the release of half year results in July.

As always, we shall endeavour to keep all of our members up to date with the developments as they occur as well as at the time of the next release.