Crude Oil remains under pressure into the New Year

One of the biggest stories of 2014 in financial markets was the collapse of oil prices, which fell by 50% from $115 per barrel (European Brent) in June to just $56 per barrel at the close of December. Since this time the benchmark has fallen by a further 20% during the opening days of January.

In addition to prompting substantial revisions to earnings expectations for oil producing corporations and sovereign states the collapse in prices has acted as a significant disinflationary, and in some cases deflationary force, across economies all around the world.

While there is both an upside and a downside to this scenario for the global economy, the question that is most on the minds of resources focused investors now is, where next for oil prices in 2015?

The key drivers behind 2014’s price action have been shocks to both the supply and demand sides of the oil price equation, although perhaps the most frequently cited cause has been the sharp acceleration in North American production (supply side).

In detail, the last year saw US production reach its highest level since before the OPEC oil crisis of the 1970’s, which prompted the US government to introduce the crude oil export ban which still exists today. This formed the supply side shock to markets, while lower demand and several downward revisions to forward demand expectations (EIA) over the medium term formed the demand side shock.

Looking ahead, it appears likely that the overcapacity in the market will soon begin to diminish, particularly in light of January’s price developments.

While exact figures vary, frequently quoted estimates suggest that Shale oil production is only economically viable if prices are above $60 per barrel on average. This is because although some producers can operate with prices close to $50 per barrel, others begin to run into problems when prices drop below $70.

Therefore, it appears reasonable to assume that there will come a time when Shale drilling projects begin to shut down to prevent losses from building. Although it is not possible to predict exactly when such producers will begin to bite the bullet, we would expect the eventual action to have a moderately positive effect upon prices.

This is while the interim is likely to see the game of chicken between the Shale industry and the world’s sovereign producers continue; which will likely impede any notable recovery in the near future.

In terms of our expectations for the full year, we have no set price target for 2015 although over the longer term, we anticipate that crude benchmarks will likely establish themselves within a relatively wide channel where $40 per barrel is the floor and $60 per barrel forms the ceiling.

Price targets from other forecasters for 2014 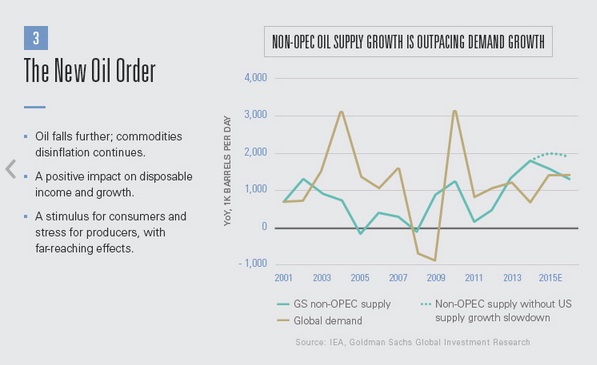