Centrica Plc (CNA.L) is an integrated energy group that supplies electricity and gas to both Britain and the US. The group is the largest provider of gas and electric in Britain while the US business is smaller but growing rapidly.

The group operates under four segments which are British Gas, Centrica Energy, Centrica Storage and Direct Energy. CNA.L is described as a vertically integrated energy organisation because it has operations across the full spectrum of the energy value chain.

It sources its own natural gas through exploration and extraction, transports and prepares recovered gas for sale,  facilitates both retail and wholesale orders and also provides after sale equipment and services. The group holds 70% of the UK’s storage capacity for natural gas.

The UK energy market is comparable to that of banking and accountancy services. It is dominated by a concentrated selection of incumbent firms (the big six) which collectively own a substantial portion of UK energy infrastructure.

Competition within the sector has been low for many years, although this is changing now; much as with financial services, consumer trust in the incumbents has also been low.

Following years of steady appreciation in share prices and increasing returns to shareholders, the UK listed energy sector has suffered several damaging blows over the last 15 months. A number of reviews and investigations into competition, pricing and billing as well as a public pledge by the Labour Party leader to freeze energy prices for 20 months if elected, have each damaged investor sentiment toward UK energy shares.

To compound concerns hanging over the energy sector, the regulator for water utilities has already taken action against its own industry by vetoing price increases and announcing to companies that they will have no choice but to accept a lower ROE and lower returns to shareholders over the quarters ahead.

This has potentially set a precedent for other regulators to follow, and with all political parties clambering to increase their share of the public vote ahead of a 2015 election, the electric and gas sector is looking increasingly vulnerable to intervention and attack. This has weighed, and is likely to continue weighing, on the shares of many providers.

In addition to this, 2014 saw the Competition and Markets Authority launch its own investigation and review into the “big six”, which has led some to fear a forced break-up of Britain’s biggest utilities.

All in all, the E&G sector faces significant pressures over the months ahead at a time when substantial investment is required in order to secure the UK’s future energy security. These pressures threaten the earnings potential of listed utilities as well as the future investment case for UK infrastructure and energy.

The group has increased earnings steadily over the last five years. Since 2010, adjusted EPS have grown by 9% while cash returns to shareholders have also improved markedly. Throughout much of this period, interest rates have been at record lows and as a listed utility Centrica shares have been an attractive substitute for income investors seeking yield.

While the shares made a strong showing throughout much of the year, the peak at 400.00 pence in September marked a turning point for sentiment toward the sector. Since this time, investors have begun to exit from CNA.L and some of its competitors, which has led the shares to fall back toward the 300.00 pence level.

Another factor which has helped to compound weakness in the shares has been a negative outlook for earnings. This has led management to lower full year guidance when delivering the interim management statement this year.

This follows a change in accounting rules which has seen 2012 earnings numbers for Centrica adjusted lower, which negates any growth between 2012 and 2013 when the new figures are used for comparative purposes.

Management cited a number of factors as drivers behind the deterioration. These include increased competitive pressures – with a number of new entrants having entered the market over the last 24 months, increased regulatory scrutiny over charges as well as lower consumption in the UK given a longer summer and milder winter in 2013.

Revised management estimates for 2014 earnings see the group announcing a print of 22 – 23 pence per share (EPS), which reflects a decline of 15.4% at the middle end of the range, when compared with the 2013 adjusted figures of 26.6 pence EPS.

While the majority of analysts view this as a conservative figure, even a revised consensus of 25.00 pence would represent a decline of nearly 9.6%. As a result, the negative outlook for earnings momentum adds to the dark cloud currently hanging over the shares. 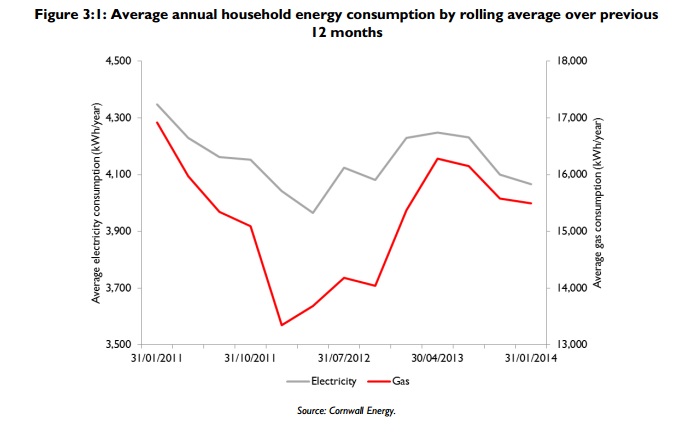 Centrica Plc and the Road Ahead

The main driver of earnings for Centrica going forward will be the group’s ability to replace diminishing output and reserves from some of its larger fields over the years ahead.

Competitive pressures will also play a key role as the UK government seeks to reduce barriers to entry into the industry and to secure a fairer deal for consumers, which may involve structural changes to both the market as well as existing operators.

Should management fail to maintain production, or if new entrants and government intervention are able to force down or suppress prices, earnings and shareholder returns at Centrica will suffer.

Under current management, the group has maintained its commitment to developing a sustainable inventory pipeline for the future and has continued to invest in new fields for development while disposing of lower value added operations.

Despite this, H1 2014 saw the big six supplier announce the imminent departure of both Chief Executive as well as the group Finance Director. At the time of writing, the remaining board’s external searches have proved fruitless, meaning that they are yet to appoint successors for the pair.

This drives a further bolt of uncertainty directly through the group’s operational and strategic outlook as it cannot be known what effect any incoming CEOs and CFOs will be likely to have upon the performance of the business.

As a result, the risk profile of CNA.L shares has markedly increased when compared with 18-24 months ago and the road ahead remains uncertain.

While there are many risks which Centrica will face over the quarters ahead, the most notable of these relate to the current government and regulatory focus upon prices and competition within the sector, as well as the potential future financial performance and balance sheet condition of the group.

Although growth in earnings was not forthcoming at Centrica during the recent financial year, growth on the liability side of the balance sheet certainly was. This was as net debt during the period increased by 24.75% from £4,047 million to £5,049 million.

The increasing debt pile during 2013 led to a 16.26% uplift in net financing costs for the year, from £209 million to £243 million. Higher levels of debt at a time when earnings are under pressure and interest rates due to begin rising is a risky proposition for even the most agile of businesses.

This risk is increased for capital intensive industries such as energy supply and has served to further elevate overall gearing in Centrica’s business while keeping its coverage of short-term liabilities (by assets) under pressure.

From a valuation perspective, CNA.L currently trades on a multiple of 11.8X 2013 earnings, which is high relative to the multi-utility average of 11X earnings. In addition to this, earnings are forecast to fall over the current year by both management as well as the analyst community.

This has the potential to stretch the valuation further, with current estimates implying a price to earnings multiple of 12.5 – 13.9 X 2014 earnings under a scenario where the current share price of 314.00 pence is held constant.

In relation to dividends, Centrica made total payments to shareholders last year which amounted to 17.00 pence per share, equating to a yield of 5.4% based upon today’s share price.

Despite the attractive pay-out, success for dividend and income investors is not merely defined by buying indiscriminately into the highest yielding shares available, but by constructing a portfolio of reasonable yielding shares which have room to grow and are well covered by earnings.

In the case of Centrica, the dividend has grown at an attractive rate over the last four to five years. However, with current levels of dividend cover uncomfortably low at 1.5 X, the current and future constraints upon earnings as well as increasing debt and regulatory costs now pose a threat to dividend growth momentum.

Consequently and in short, balance sheet, dividend and valuation conditions all hold bearish connotations for the shares going forward while the risks of ownership relative to 24 months ago have markedly increased. As a result, we find further reason to be cautious of the overall outlook for Centrica Plc going forward.

Utilities traditionally make for an attractive investment, and while the case for Centrica is not without its merits over the longer-term, the shares do now come with a substantial degree of risk attached.

Debt within the business continues to increase at a time when servicing costs are rising. This is while a dark cloud hangs over the group’s ability to meaningfully grow earnings during the coming years.

The net effect of these dynamics is a dividend at risk. From here we expect that dividend growth will be constrained, while looking further out the existing pay-out also appears vulnerable.

At present, there is strong support for CNA.L above the 300.00 pence level. Although the technical picture leaves the shares looking attractive, the fundamental argument for them is weak and consequently; we are unenthusiastic about the risk-reward scenario for new or continued investment.

In relation to the trading outlook; Centrica is likely to announce further negative guidance at the interim management statement on 31 July, while overall expectations for the year continue to see a reduction in earnings for 2014.

Without further pre-emptive declines in the share price, this would lead the valuation to become overextended and, as a result, leave CNA.L vulnerable to a further correction in the future.

Should the management outlook at the close of July imply a further deterioration in the group outlook then this could act as the catalyst for a break below the 300.00 pence level.

On the other hand, a positive update from management could provide the basis for a brief recovery in the shares, in which case we would look to see a move toward the 350.00 pence barrier.

Regardless of the end of July outcome, our medium to longer-term view sees the risks attached to Centrica shares as outweighing the benefits of holding them and consequently, we prefer to seek UK energy opportunities elsewhere.