Founded in 1908, BP Plc (British Petroleum) is one of the world’s largest oil and gas companies. It operates under two business units: Exploration and Production followed by Refining and Marketing.

Earnings tumble was less than expected at BP Plc for 2014, prompting a sharp bounce in the shares

After hitting our price target in early January, BP shares underwent a strong rally throughout the later stage of the month and into February as the oil price appeared to stabilise and the decline in earnings expected for the full year emerged less severe than many had anticipated.

In detail, earnings adjusted for the sale of its stake in TNK-BP during 2013 were just over 11% lower in 2014, while impairment charges were just $6 billion, despite the drop from $115 –  $41 in the oil price. BP’s provisions for further legal costs were less than $1 billion, which is a much lower amount than had been expected.

However, and despite the pervading air of positivity surrounding the group at the moment, we caution that risks still abound for the oil major.

Most notably, while BP’s full year profit adjusted for the impact of its TNK-BP sale last year was a mere 11% lower, this was largely due to lower than expected impairment charges; which could increase considerably in the coming quarters. (See below – There may still be more pain to come for BP shareholders as further impairment charges loom).

Furthermore, if we are consistent in our approach to analysing the income statement and the balance sheet, which means stripping away the effects of gains made on disposal of assets during 2014, then BP’s underlying business made a profit of just over $500 million for the period.

This is a result that is in stark contrast to the “strong year” which is detailed in the full year announcement by BP.

While BP maintains an attractive dividend and by some metrics, may appear cheap; we argue that this is not the case. We discuss Bp’s relative value later on in this report (Balance sheet, dividend & valuation update) however, we first look at the activity surrounding impairments for 2014.

During the year, BP took impairment charges to both its balance sheet and the income statement in relation to a number of assets, as a result of the lower price environment and revisions to recoverable reserves. While this was to be expected given the deterioration in market conditions, we caution that the worst may still be to come for BP shareholders.

This is as when the group reported results, and when it calculated the year’s impairment charges, it appears to have done so using an average oil prices that was close to $90.00 per barrel.

Given that Brent and WTI prices have been as low as $40 since the beginning of 2015, the $87 used to charge impairments to the financial statements significantly overstates the value of reserves (and as a result, NAV) at current prices.

Therefore, if we are correct in our anticipation that Brent/WTI prices will remain locked between $40 – $60 throughout the current year and that a rough expectation for the average in 2015 would $50, then shareholders could see further substantial impairments later in the current financial year. 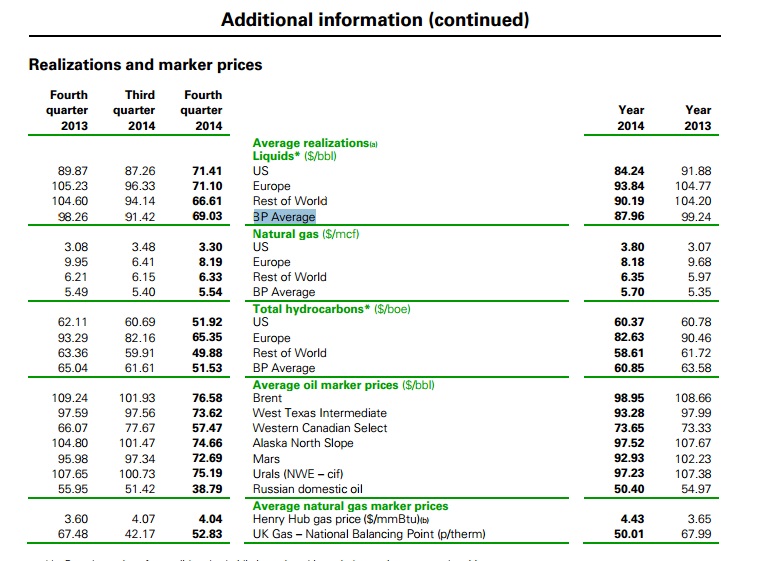 The group soon expects to have an idea of exactly what penalties it will have to pay under the Clean Water Act in the United States.

While the total payment could be as much $13 billion if the enhanced penalty rate is applied, it is possible that the group could manage to secure a penalty rate as soon as the middle of February.

This is because the group has only been found liable for enhanced penalties in one of the two trials which have taken place so far. All in all there are three trials which the group is subject to, with the third and final one due to conclude in mid February.

While in the final trial it will be at the judge’s discretion as to whether or not BP faces enhanced penalties, the court is obligated to consider the outcomes of both of the earlier phase 1 and phase 2 trials, which means that outcome is far from certain as in the more recent of the earlier proceedings BP was found not to be liable for enhanced penalties while in its first appearance in court it was.

If the group is able to persuade the judge that it is should not be treated as “grossly negligent and guilty of willful misconduct” then it is likely that total fines under the Clean Water Act could be as low as $3.5 billion; which would be a very positive outcome for shareholders.

Recent price action indicates that crude oil appears to be in the process of bottoming out. Here, we note that last week saw the rig count of active North American shale producers contract sharply as drillers capitulate in the face of high costs and a weak market.

This was the key catalyst behind the $10 bounce in both Brent and WTI which has ran from last Friday through to the close of this week.

While it is not yet clear whether this rally will continue unabated we do believe it is reasonable to assume that any further decline will be limited, given that we now appear to have found the point where supply will begin to drop out of the market.

Nevertheless, it will be a long time before we are likely to see prices return to the levels seen only a few short months ago and for this reason, we see further downside to the Oil & Gas sector over the course of 2015.

Reducing capital investment from $24 billion, down to $20 billion in order to combat the effects of lower oil prices. While this will predominantly impact upon exploration, which is bad over the long term, it should help to keep a cap on leverage and reassure investors over the balance sheet in the short term.

In terms of the dividend, management appear to remain committed to increasing the shareholder payout over time, which has so far proved sufficient to convince the market that it remains on a sound footing for the time being. This is despite that the majority of the payout is made up of proceeds from the disposal of assets; disposals which cannot continue forever.

As it stands the group has paid 23.85 pence to shareholders so far in dividends, with a further 10 cents announced this week. The 10.0 cents payment for Q4, while yet to be announced in sterling terms, is likely to amount to just over 6.0 pence per share.

This will take total payments for 2014 to just over 29 pence, implying a yield of just over 6% based upon today’s prices.

This is an attractive dividend in the current market environment and, while we remain sceptical of its sustainability, we see the yield becoming a key driver of the group’s share price over the near term at least.

From a valuation perspective, BP has suffered a number of earnings downgrades during recent weeks, which come combined with a lower EPS result for the 2014 year, even after adjusting for one off revenues in 2013.

These downgrades have led to some level of expansion in the group’s earnings multiples, which have now lept from just under 10X forward earnings, to just over 15X consensus estimates (26.66 EPS) for 2015.

While broadly in line with the wider market this is a high valuation in comparison with recent history, which is largely the result of negative earnings momentum and in our view, is less likely to be sustained over the medium term.

On balance, we still see a rocky road ahead for BP. While positive sentiment resulting from increases to the dividend and a rebound in the oil price may help to support the shares over the short term, we see downside risks as outweighing the potential for further gains in the case of BP.

Most notably, we caution that the expansion in earnings multiples has not been the result of any improvement in fundamentals, but more negative earnings momentum which is likely to continue if oil prices remain below $60 per barrel throughout the current year.

Therefore, our first key point is that the above provides scope for a re-rating lower at both the group as well as at the sector level during the months ahead.

Furthermore, we note that BP charged impairments of just over $6 billion to the income statement and balance sheet during 2014, much of which related to the valuation of reserves. However, these impairment charges were based upon oil prices which are substantially above any that we are likely to see in 2015 ($87 per barrel).

For this reason, we caution that balance sheet assets are at risk of further impairment over the coming quarters, which could be considerable and therefore, may also the dividend and the viability of some segments of the business into question. This is likely to provide further momentum to downward pressure upon the shares during the months ahead, particularly if oil prices are to remain low.

In addition to the above, if gains made on disposal of assets are stripped away from BP’s financial results for 2014 then its earnings from the underlying business were little more than $500 million. This is important because, although the group expects to make roughly a further $5 billion in disposals this year, if it is unable to continue to do this then the impact upon its performance in 2015 would be considerable.

Here, we note that if the current oil price environment persists for a considerable period, then it is unlikely that BP will be able to achieve the desired sale prices for its assets and therefore, gains on disposal of assets would be much lower in 2015 anyway.

Last but by no means least, we caution that while the group has good reason to be optimistic that Clean Water Act penalties will be below the maximum level, this is far from guaranteed. If it were to be charged the maximum rate then the charge to the financial statements will be significant, at $13 billion.

BP could also face further claims from both local businesses as well as its shareholders in relation to the 2010 accident, both of which will involve liabilities which cannot possibly be estimated at the present time.

Furthermore, risks relating to the group’s investments in Russia are likely to continue as an issue in the near future as the crisis in Ukraine, and therefore the sanctions war, both remain far from over.

Consequently, and on the whole, the road ahead for BP shareholders remains a hazardous one in our view.

In terms of price targets, while anticipate that the shares will attract a degree of support from a dividend that remains considerably above the index average over the near term, potentially driving the spot price above the 450.00 pence mark for a time however; we also believe that fundamentals for both the group as well as the wider industry are likely to prove the ultimate driver of the shares over the medium term.

Therefore, we maintain our price target for BP Plc at 385.00 pence per share for the time being in anticipation of renewed selling pressure during 2015.