Bovis Homes Group Plc are one of the UK’s major house builders. Its principal business is development of residential homes, most of which, are located in the South east of England and Wales.

Although most of the group’s resources are focused upon delivering new homes, Bovis also spends a significant amount of time sourcing its own future developments sites, which are held within its land bank.

The group has a market capitalisation of £1.2 billion, is listed on the London Stock Exchange, and is a constituent of the FTSE 250 index.

Bovis pares losses in the second half; now within reach of March highs

After a tough first half, which saw the shares fall to their lowest level since October 2013, Bovis Homes Group Plc underwent a strong recovery during the second half. This has seen the shares trade as high as 912.00 pence in the final quarter of 2014 and throughout the opening of the new year.

While we wrote at length previously about how many of the mainstream house builders would struggle to replicate the growth of H2 2013 throughout the current year, our projection for Bovis shares appears to have underestimated investor’s appetites for them.

Key to this recovery has been a better than expected update from management in the first half, where the group declared that it had not been impacted by the slowdown in mortgage approvals during the period, before announcing a positive outlook for the remainder of the year.

In addition to the lesser than anticipated impact of a market-wide slowdown in mortgage approvals, the interest rate outlook for the UK economy has also changed markedly during the intervening period and now offers scope for the housing market rally to extend further. 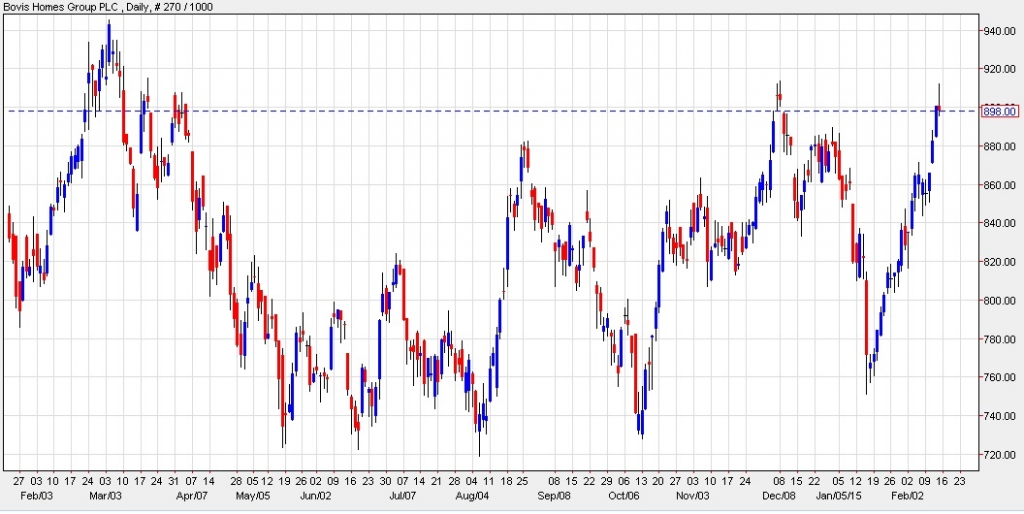 In relation to the balance sheet, recent guidance suggests that Bovis Homes went from net debt position of £18 million on its balance sheet at the close of last year to a net cash surplus of £5 million during 2014. This is while both margins and returns on capital rose strongly throughout the period, both of which are positive for the business and its investors.

In terms of dividends the group continues to favour a policy which will see it return 25% – 30% of earnings to shareholders over the long term, which should provide for minimum dividend cover of at least 3X DPS.

However, for the current and subsequent year the board has pledged 35.0 pence per share in total dividends, given the strong operational and financial performance of the business throughout recent times.

From a valuation perspective, we wrote extensively this week about how we believe the sector is now approaching an inflection point, which is likely to prove a net positive for investors. For more information relating to our outlook for sector valuations, please see our report: Updating our outlook for the UK housing market and for UK house builders

In relation to Bovis, we expect both earnings as well as price/TNAV values to decline further throughout the first half, driven in part by the pressures of the general election and in part by cyclical factors.

While earnings growth and the absence of a sustained re-rating for the shares over the near term are likely account for some of this reduction, we believe that some of it will also be accounted for by a decline in the shares.

However, we anticipate that valuation multiples will be likely to bottom during H1 2015 and that this will probably represent an inflection point for Bovis as well as the wider sector.

While full year results for Bovis Homes Group are yet to be revealed (end Feb), January guidance from management suggests that earnings grew strongly throughout 2014, which is likely to see EPS edge closer to its pre financial crisis high of just over 80 pence.

This is while our outlook for the UK housing market suggests that 2015 could also be a positive year for UK house builders although, admittedly, further gains are unlikely to be sustained ahead of the general election in May.

However, looking past this point, if consensus estimates prove to be correct then we would expect valuations for Bovis to bottom at 9.5X on a price/earnings basis and 1.2X on a price/TNAV basis some time in the second quarter of this year.

It is these levels that we would expect to represent an inflection point for the group, as well as the wider sector, from which the above values should soon begin to rise.

We expect this to happen as our outlook for house prices indicates a certain degree of support for further earnings growth during the year ahead, while if valuations fell further from the projected points the shares would be close to trading at a discount to TNAV. Such an outcome we view as both unwarranted and unlikely.

For this reason we expect 2015 to be a year of strong returns from Bovis Homes Group Plc, which will likely see us revising our price target for the shares somewhat higher toward the close of H1.

However, over the near term, we expect the general election and downward pressure upon valuation metrics to drive the shares lower from their current levels during the immediate future.

As a result, and although we raise our price target for BVS moderately today, our revised projection (735.00 pence) still implies just over 15% downside from the current level.

The next major event scheduled for the group will be the release of full year results on 23 February. As always we shall endeavour to update all of our members in greater detail at this time.