Admiral Group Plc is the UK’s leading motor insurer. Since 2004 it has been listed on the London Stock Exchange as part of the FTSE 100 index. It now employs 7,000 members of staff and operates 14 brands worldwide. In 2013 the group insured 3.7 million vehicles and reported revenues in excess of £2 billion.

Opportunity in the Insurance Sector

Since late in 2013, one of the many areas that we have been attracted to from an investment and opportunity perspective has been the insurance sector. For those concerned that the end of quantitative easing programmes and a slow tightening in monetary policy across developed markets may disrupt or inhibit portfolio returns, the insurance industry presents an attractive hedging opportunity.

Given that many insurers derive a substantial portion of their income from fixed income investments, our view is that when benchmark rates and treasury yields do eventually begin to rise, earnings at these firms will be likely to benefit.

Although the reliance of Admiral upon investment income is relatively low when compared with other insurers, the strategy still contributes toward the overall investment case for the group as any increase in income is likely to be positive for overall earnings.

Despite this, much of the support for our attraction to the shares comes from the group’s strong track record at generating growth across many of the key reporting metrics and its clear strategy for future expansion of a tried and tested business model.

Since covering Admiral Group in November last year, the shares have performed largely in line with expectations, continuing to reverse their previous decline and retrace toward their 2011 peak.

In relation to performance at the company level, the group continues to grow despite the fact that the competitive motor insurance market in the UK has led to a reduction in premium rates and the potential for pressure upon earnings. The group reported full year results in March 2014, before providing an update on trading in its interim management statement during May.

Although turnover was down during 2013, Admiral increased its overall vehicle count by 4% while underwriting success and greater reserves releases supported underlying earnings growth at the group level. Consequently, earnings per share grew by 10% from 95.1 pence to 104.6 pence over the period.

The most notable feature about group performance over the period was strong progress in Admiral’s fledgling overseas operations. The top performer for the year was the French operation which underwent a phase of rapid growth, with vehicles insured rising by 113% to 28,600 and turnover increasing by 103% to £13 million.

In addition to the growth at the French operation, 2013 saw the launch of Admiral’s first online price comparison business in the US (comparenow.com) to complement existing insurance operations. Vehicles insured and turnover also increased by 34% during the period to 70,300 and £48.8 million respectively.

Elsewhere in the world, the Spanish business also experienced strong growth across many of the major reporting metrics including vehicles insured, turnover and profits following a successful publicity campaign. Turnover now stands at £40.6 million, representing an increase of 24%.

All in all, growth in Admiral’s international businesses continues to outstrip that of the UK which currently contributes the lion’s share of earnings. While the international income earned by the group represents only a small portion of Admiral’s profits, the evident viability of these ventures does bode well for future earnings prospects and has, in this case, helped to take the sting out of the current downturn in UK car insurance premiums.

Going Forward; the Road Ahead for Admiral Group

While market nervousness over the increasingly competitive motor insurance market in the UK kept downward pressure upon Admiral’s share price throughout 2013, management continue to hold a positive outlook for group performance going forward.

In the most recent set of full year results, the management highlighted the favourable claims environment as a key driver of improved profitability over the period. Should this trend persist, the group expects to be able to make further “substantial” reserves releases which will continue to support already strong growth in cash returns to shareholders.

In addition, management believe that better economic conditions across core markets are a likely precursor to an upturn in business volumes, which supports expectations for stable or higher revenues and an eventual recovery in premium rates as well as margins.

Price comparison operations are now a substantial driver of new business sales volumes across the group as well as the wider industry. Given Admiral’s dominance of the price comparison arena, the group benefits from cost-effective access to a wide array of sales channels. 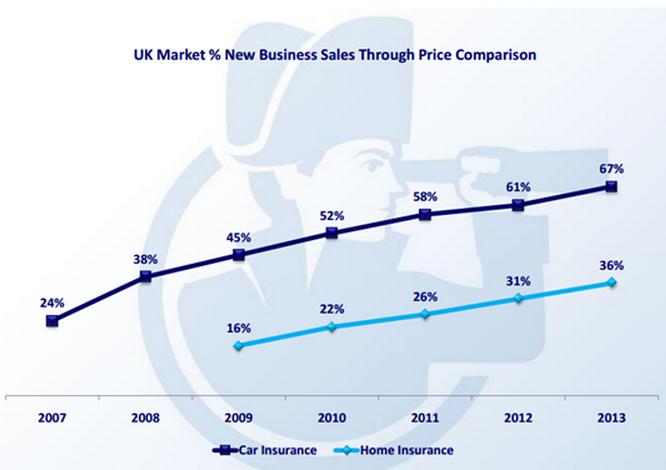 From a valuation perspective, the group currently trades on a multiple of 14.24 X 2013 earnings. This compares favourably with the industry average of 15.42 X non-life insurance businesses and in our view overlooks the benefits of the group’s diversified business model and growth prospects in international markets such as the US and Europe.

In relation to dividends, Admiral has a lengthy track record of generating strong growth in cash returns to shareholders. During the 2013 year, the total pay-out increased by 10% to 99.5 pence per share, which equates to an attractive yield of 6.67% based upon today’s prices.

The group has a progressive dividend policy which sees all available surplus capital, over and above that necessary to support growth or solvency, regularly returned to shareholders. 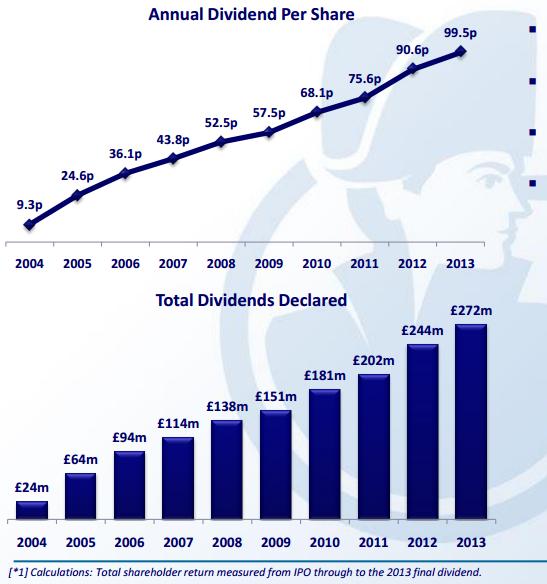 In relation to risks, competition in the motor insurance market remains fierce, which exposes Admiral Group to the risk that premium rates may remain low for an extended period of time. If this scenario does become reality, then it could eventually detract from earnings and the group’s ability to return cash to shareholders.

In addition to the above, Admiral Group is also faced with the ever-present risk of a turn for the worse in the claims environment across any or all arms of its business. This could detract from earnings and impede upon the group’s ability to grow, or continue with, its return of capital initiative. In the event of such an outcome, sentiment toward the shares could sour considerably.

Further from here, should growth momentum in the international side of the group begin to slow, sentiment toward the shares could also be negatively impacted, which would in turn be negative for the share price.

In short, Admiral Group remains a highly attractive prospect for those investors looking to hedge against any adverse impacts that may arise as a result of an eventual rise in interest rates.

In addition to this, the group’s growth prospects are favourable given ongoing progress in international markets, while management’s pledge to continue returning excess capital to shareholders provides an abnormally high dividend yield for a high growth and large cap business.

Given that Admiral shares have now managed to shake the bearish sentiment which drove the stock lower throughout much of 2013, we believe that growth expectations for the group’s international markets and the prospect of an upturn in UK motor insurance premiums will underpin positive momentum behind the shares over the near to medium term.

In relation to price targets, although the 2014 appreciation in the shares has led the risk reward ratio for Admiral to diminish, we do see further upside over the months ahead. Our medium term price target sees a further push toward the 1,620.00 pence level as the most likely outcome for H2 this year. This is while, in the event of any market correction, we expect strong support for the shares at 1,420.00 pence level.